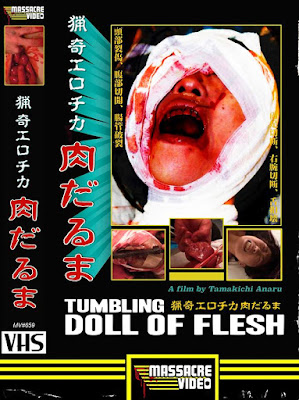 "Tumbling Doll of Flesh" is a 1998 Japanese porno/horror film directed by Tamakichi Anaru, which has recently been released on DVD for the first time outside it's native country by a company called Massacre Video.

At one point a few years ago after I had purchased the "Guinea Pig" series (I have posts on all the films in the  series, the American ones excluded), I decided to research and watch some of the most notorious and extreme Asian films ever released. I would buy and watch any Tartan Asia Extreme release I could lay my hands on (I live in the UK), or order films that can't be bought in the UK online ("Grotesque", for example, which has been banned in this country). There were, and still are, a few that have been out of my reach due to ridiculous prices that out of print movies have always had.

Anyway, this phase of my collecting ran its course and fizzled out once I started feeling burnt out watching so many similar movies. For a couple of years after, my viewing choices became somewhat tamer in tone while buying any titles that caught my eye from niche distribution companies.

One day while scrolling through Facebook I noticed that Massacre Video was releasing "Tumbling Doll of Flesh", a film that was on my Asian nasties list but was always too expensive and hard to find, so I immediately ordered. I never actually knew that much about the film until I watched it, except that I knew it was fairly notorious. Now I understand why.

There isn't much in regards to story. Two people are recruited to star in a pornographic film, each being interviewed individually and being given details of what is to happen. The woman is told that she will be involved in some things she might feel uncomfortable with like S&M, but she agrees to the conditions. The man is asked ominously if he understands and agrees to be a part of the film, which he accepts. 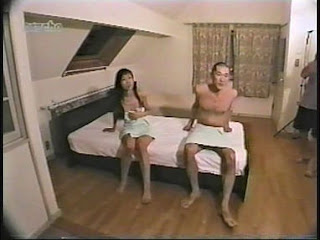 Once the simple sex scenes are filmed, the actors move to a different room with a bed in the middle and plastic sheets covering the floor, a pretty good indication that things aren't going to turn out to well! The woman is tied up and subjected to a couple of acts that make her feel really uncomfortable. The director is pretty unhappy since she had agreed to do the film and was warned beforehand that it would involve some discomfort. They untie her and there is a tense dinner scene where she apologises and states she wants to leave the shoot. The next day the director tells her she can go, but then knocks her out with a pretty nasty blow to the head with a baseball bat! 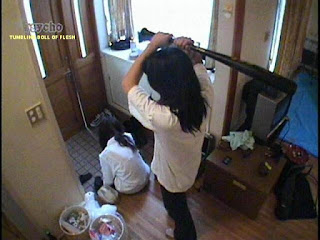 After this, things get really nasty. There's torture, mutilation, dismemberment, castration, and some really messed up intercouse with open wounds. Due to the hand held style of the film, there's a certain unpleasant, uncomfortable, perverted, voyeuristic feel to everything that's happening. I haven't felt so uncomfortable since watching some of the things that happen in "Grotesque".

During the more violent part of the film I was reminded of "Flower of Flesh and Blood" a lot. Effects wise it's quite decent but obvious that everything is pretty fake. DVD can be quite unforgiving when it comes to effects, even in bigger films, so this is forgiveable. The effects are still quite nasty though. The movie was made for video so I can imagine things would look a lot more realistic on VHS, especially if the picture has degraded a bit. Also some of the things you would deem as most shocking like the castration scene loses any shock since it's pixellated out. This film along with "Grotesque" would make a good companion piece to the aforementioned "Guinea Pig" film if you could stomach it. 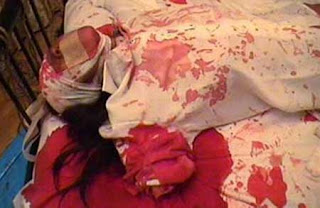 I don't really know what to think about this film. It definitely deserves its notoriety so I guess it has that on its side. The thing about films like the "Guinea Pig" series (after the first film) and "Grotesque" is that they have some semblance of artistic merit. They are at least trying to present a narrative. This film has no real story at all unless you count in the "client" that the director mentions and calls at the end of the film, much like the end of "American Guinea Pig". After giving the director, Tamakichi Anaru, a bit of research, he seems to quite enjoy making films about torturing and mutilating women with next to no plot attached.

Unless you're a gore hound who doesn't care for story, or a collector who collects hard to find extreme films, or someone who wants to be made very uncomfortable and dirty, or just plain sick, I couldn't recommend the film to anyone outside of it's niche. 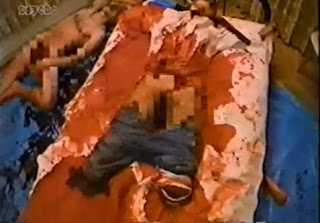 I do commend Massacre Video and their efforts to have this and other hard to find releases available to the public (I first saw Orozco, which I have posted here, through these guys). The DVD is quite well put together. There are subtitles, trailers, and I managed to bag a poster of the film that was available for the first 50 orders. Thanks for putting in the extra effort!

So now my curiosity is sated after hearing about this film and it's reputation a few years back. I'm glad to have finally seen it, but it made me feel dirty and a bit nasty. Now it'll go into my hidden shelf with the rest of my really nasty stuff. Here's a lovely image of someone's tongue being scraped with a potato peeler so you can feel just as dead inside as I feel! ;) 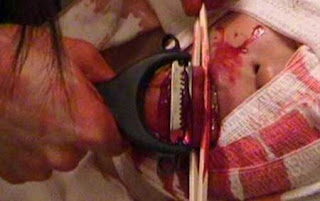 Thanks for taking the time to read this post. This is the first movie I've talked about on here in 2+ years. Personal health problems and internet drama made me give up for a while, but hopefully I'll be more regular in updating this page. Cheers!

LeftFieldFilms
Glasgow, Scotland, United Kingdom
Hi welcome to Left Field Films! My name is Michael and I love talking about films that are slightly off kilter or classics that are off the radar a bit. I hope you enjoy yourself and feel free to comment. I love a good debate!

Proud Member of the HBA!